Light is made of photons flowing in the air at the speed of 300 000 kms/s. Each photon carries an energy, related to its wavelength, and to a colour. Because white light is a mixture of all colours visible in the rainbow. This colour composition is called the “spectrum” of light : from the blue (400nm) to the red (700 nm) through the green (550nm) and the yellow (580nm). Amorphous silicon is able to convert all this visible light, and even below, in the ultraviolet down to 350nm, and the near infrared up to 750nm. THis light range is that our eye can detect, and also that the plants use for their photosynthesis. That is why SOLEMS detection cells are adapted to PAR measurements (Photosynthetic Active Radiation 400-700nm) and to lux measurements (450-750nm), and to indoor light controls. * PAR = Photosynthetically Active Radiation

The solar spectrum (produced by the sun) is wider than that. Ultraviolet light starts at 200nm, and in the infrared region, sun produces light up to several microns (1µm = 1000 nm). So a cell with wider spectral response must be used to measure solar radiation : a crystalline solar cell is used, with a response from 400 to 1100nm.

How does a silicon photodetector works ?

When a solar cell becomes a light sensor…

In a solar cell, the short circuit current (current delivered under a very low impedance) is proportionnal to the amount of light impacting the surface. So a current measurement has to be done : not in the conditions of maximum power like for power generation, but in the conditions of near short circuit conditions (near 0 volts). And according to the type of cell, the signal obtained will be proportionnal to light intensity, either in lux, or PAR, or W/m² of solar radiation. Curent can be converted into a very low voltage, or detected in a 4-20mA loop.

More in the paper written for INRA “Cahier des techniques” – in french -:

Some mistakes to avoid...

When a solar panel cannot be a light sensor…

All photovoltaic module, and most of the amorphous silicon solar cells are made of individual cells linked in series. In such an electrical conncetion, if light intensity is not identical on all the cells, the cell receiving less light will pull the current of the whole chain down. This makes a false result, it is not the average light intensity that is measured, but the minimum. That is why SOLEMS designs and produces light detection cells of various dimensions but always made of ONE SINGLE solar cell. These cells really measure a mean light value.

When you want to make easy unit conversion …

A question often heard : what is the conversion between lux and Watt/m² ? ANSWER : it depends on what you’re talking about ! The unit “Watt/m²” is only describing an intensity, as “lux” is designing a spectral domain 350 – 750 nm acccording to a given curve (our eye response). So there can be absolutely no lux in a beam measured in Watt/m² if it is a beam of X-rays for instance. Because X-rays are in a completely different wavelength range as compared to lux. So it is necessary to be very cautious when using such conversion. The important thing is to speak of a given SPECTRUM. When speaking of the sun, in “Standard Test Conditions” described by a spectrum AM1.5 *, an intensity of 1000W/m² (see below) contains 100 000 or 112 600 lux depending on the authors and the kind of calculation. 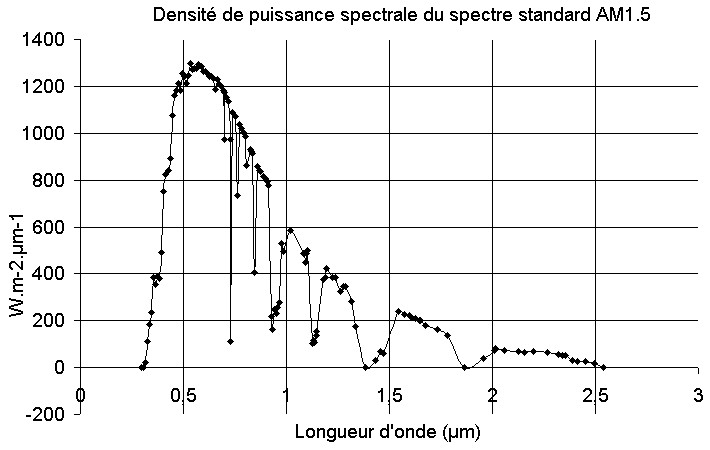 * Solar spectrum AM 1.5 : it is a normalised spectrum of the sun light passing through a cloudless air thickness (called Air Mass) corresponding to 1.5 times the thickness of the atmospher. This situation occurs when the sky is very clear and the sun impacts the earth with a solar height of 41.8° (angle from the horizontal).